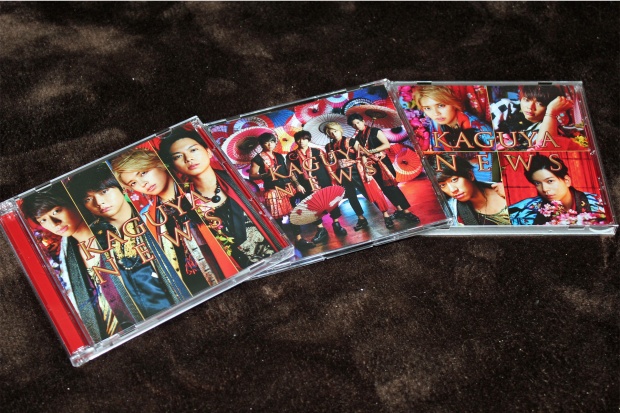 KAGUYA is NEWS’s first single of 2015 released on January 7th, and they came out with a bang! The theme of this single was “Princess Kaguya”, which is a famous story in Japan called “Princess Kaguya – The tale of the Bamboo Cutter”. It made it to the #1 spot on the Oricon weekly charts and stayed in the top 3 throughout January. Famous Director Ninagawa Mika directed the Music Video and did the Cover Jacket shooting.

KAGUYA is an “epic love song” that is a perfect combination between modern and ancient; the overall sound is modern with a combination of old sounds and old style lyrics infused into it. I love the echo of “Saga, Saga” in the background of chorus! The lyrics have a poetic feel to them, written in the perspective of the men who loved Princess Kaguya. The song is quite sexy, but in a subtle way, really showing NEWS’s grown up and sensual side. The song follows the story of Princess Kaguya, in which there are 4 princes that are invited to the home of the princess to try and become her husband, and they instantly fall in love with her.

The first time I heard this song I thought, “This is very much a NEWS-like song”. The vocals are very sweet and is a typical NEWS-like love song. I love the piano in it combined with the soft guitar. The part Koyama sings before the chorus starting with “Anata” each time is just so heartfelt and sweet and the harmonization of NEWS’s voices when they sing “Butterfly” is just amazing.

The melody of this song, combined with the piano, reminded me of TM Revolution’s “Thunderbird”, which Tegomass had performed together with him on Music Fair before. This song is short, but very heart wrenchingly beautiful. This song surprised me because it sounds more like a Tegomass song than a NEWS song, but the vocals, especially Shige’s, are amazing for this song.

TOP OF THE WORLD

This is a very upbeat, dubstep-electronic like song. It’s not hard-core dub-step like Kanjani 8’s “Sorry Sorry Love”, but it is more of a lighter electronic dub-step song. I was attracted to this song because I love dance like songs, so I hope that this is one of the songs that they perform in concert in their upcoming tour.

This is a more of a swing like song with elements of their past song “Say Hello” in it. I liked the fun swing sound to it, which is rare in NEWS songs. Based on some feedback online I saw, people really didn’t seem to like this song, but I think it would be a fun song for them to do in concert.

The music video, as mentioned previously, was directed by Ninagawa Mika, who is a famous director and photographer known for a very colorful and sexy style to her works. She has directed AKB48’s “Heavy Rotation” music video and also was the director for the movies “Helter Skelter” and “Sakuran”, a movie about high-level prostitutes in the Edo period of Japan (Please correct me if I am wrong). This music video for Kaguya was no exception, full of color and very sexy, but in a subtle way. There is something very sexy about old-style Japanese clothing and props, like kimonos. It showed a more sensual side to NEWS that we haven’t really seen before. I love the dance when they pull their shirts to the side and show their shoulder slightly and also dancing while holding the Japanese style umbrellas. The set covered with colorful umbrellas and ornaments was outstandingly beautiful as well. I love the old style Japanese feel to the music video, showing them in an array of outfits from traditional kimonos to a more modern style button down shirt during the water scene. Ninagawa Mika did an amazing job with this music video, bringing out NEWS’s sexy side.

This is NEWS’s first single that hasn’t had any tie-in to it in a long time, and no soccer song as well. I am in love with this single and think NEWS and their whole team did an amazing job planning it. I think it was sexy and colorful, but still stuck to NEWS’s regular style, which is more “pure”. The B-sides were really good as well, making this one of my favorite NEWS singles in recent times. I really liked this change of pace and I can’t wait to see more from them in the future.

What do you think of KAGUYA? What did you think about Ninagawa Mika directing the Music Video? Let me know in the comments below!

Hirakata City holds a special place in my heart... it was the first place I lived for an extended time in Japan and where I met my best friend almost 9 years ago studying abroad at Kansai Gaidai University in late 2011. Hirakata T-Site opened in 2016, long long after my days there, but I finally took the opportunity to stop by and it was so nostalgic to go back to Hirakata-shi station and see how much it changed since 2011. Any other Kansai Gaidai OG’s out there?? ⁣ ⁣ ⁣ #japanlife #japan #amazingjapan ⁣⁣⁣ #travel #traveljapan #japantravel⁣⁣⁣⁣⁣⁣⁣ #ExploreJPN #visitjapanjp #girlswhotravel #girlswhowander #girlsabroad #wanderlust #asia #travelasia #asiatravel #osaka #expat #expatlife #lifeabroad #explorejapan #ig_japan #igers_japan #大阪